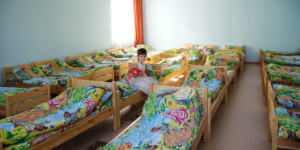 A social orphan is a child who is available for adoption and has at least one living birth parent. Their child could be in an orphanage/foster care facility for many possible circumstances, such as addiction, poverty, neglect, or abuse. In some countries, it is not uncommon for birth parents to place their child in an orphanage temporarily in hopes that their financial or health status will improve.

An important question many ask is why so many children are placed in orphanages at birth. In many countries, it is a social stigma to have a child born with a disability. In Russia, doctors often encourage birth mothers to place their child in an orphanage. The sad reality is that these children often do not fare well in an institutional setting. It is uncommon to adopt a newborn through international adoption. Older children (usually age two or older in most countries) available for adoption may be sibling groups, children with special needs, or children who have suffered early trauma.

When determining if a child in another country is available for adoption, potential adoptive parents must consider the laws of their country, the laws of the state they reside in, and the laws of the country the child lives in. Since 1993, the Hague Convention on the Protection of Children and Co-operation in Respect to Intercountry Adoption has governed the adoption process by member countries who have signed the Convention.

For the Hague Convention members, in order for a child to be considered available for adoption, a set of criterion must be met. The Hague Convention was created to protect all parties–adoptees, birth parents, and adoptive parents. Some countries are not members of the Hague convention but have similar laws governing the adoption process. In most countries, an “orphan” is a child who has no living parents, a child who has been voluntarily placed for adoption by birth parents, or a child whose birth parents’ parental rights have been terminated. It is important that potential adoptive parents be familiar with laws of their country as well as the laws of the country of origin of the child they are adopting.